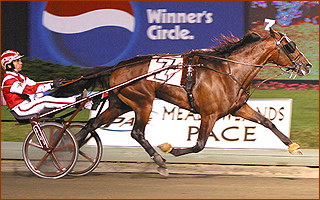 H, 2001 By Self Possessed-Canland Hall, by Garland Lobell

One would expect greatness from a $310,000 yearling from one of trotting's most desirable families, and Cantab Hall delivered. He went through his freshman season undefeated in 10 starts, won every major stake in sight and became the first 2-year-old in history to be voted overall "Trotter of the Year."

He came back to win close to a million dollars at 3, winning four major stakes on the season but disappointing his fans in the classics, finishing second in the $1,000,000 Hambletonian and second in the $530,000 World Trotting Derby, although timed in that race in a scintillating 1:50.4.

Cantab Hall, a son of Brittany-bred Self Possessed from a full sister to World Champion Cameron Hall, has been one of the most dominant trotting sires of the modern era. He was the leading money-winning trotting sire for three consecutive years and has produced the winners of more than $108-million.

His offspring include such greats as brilliant racehorse and sire Father Patrick and Hambletonian Oaks winners Wild Honey and Lifetime Pursuit. He is the sire of 2020 2-Year-Old Breeders Crown Champion On A Streak and 2021 Valley Victory and Kindergarten Final winner Fast As The Wind.

He has sired the dams of Horse of the Year Atlanta, Trotter of the Year Jujubee, $3-million winner Manchego and three other champions and millionaires: Ariana G, Southwind Frank and Six Pack.

He was elected to the Living Horse Hall of Fame in 2018.