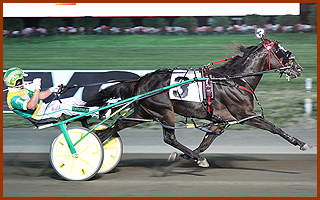 At 2: World Champion on both five-eighths (1:50f) and half-mile (1:52.2h) tracks. Undefeated in eight starts and voted Dan Patch Champion 2-Year-Old Pacing Colt of the Year. At 3: Became the co-fastest racehorse in history, with his mile track World Record (1:46.4) taken winning the Meadowlands Pace.

He’s Watching, diminutive in size but a giant as far as his accomplishments, has been called harness racing’s bargain of the century. The $3,000 yearling earned over a million dollars during his career and became the co-fastest pacer in history (at the time) with his 1:46.4 victory in pacing’s most prestigious 3-year-old event, the Meadowlands Pace.

He was undefeated as a 2-year-old, taking eight consecutive wins in New York Sire Stakes races, including the $225,000 final. Along the way he blazed to world marks over Tioga’s 5/8-mile track and Yonkers’ half-mile oval. His accomplishments led him to the title of 2-Year-Old Pacing Colt of the Year.

After placing in the $1,000,000 North America Cup at 3, he made his calling card pacing’s classic event, the Meadowlands Pace. His all-age world record time of 1:46.4 and final quarter of :25.3 in that race made driver Tim Tetrick remark, “My horse really exploded tonight… it was unbelievable. He’s a very special colt, very fast. He’s not big, but he’s mighty!”

Like so many of the great Brittany-bred males, he has moved up to his second career as a sire. From his first Ontario-eligible crop he sired O'Brien Award winner, FFA standout and millionaire Tattoo Artist. He now stands at Winbak Farm of Delaware.