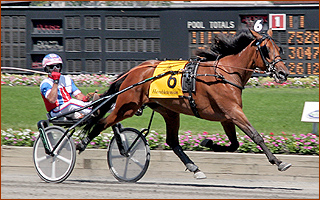 Owned (during her racing career) by: Brittany Farms

The royally-bred filly dominated her division as both a 2 and 3-year-old. Her wins in five major stakes at 2 and victories in the glamour division classics at 3 easily garnered her Dan Patch divisional honors both seasons. Many will remember her three-heat victory in the Kentucky Filly Futurity, when her driver Ron Pierce directed a "goodbye wave" to the competition (see video below).

It would be remiss to review Passionate Glide's impact on the sport without mentioning her pedigree—replete with champions and one with a gigantic impact in the commercial marketplace.

The daughter of Yankee Glide is from Miss Marita, who has produced three $100,000-plus yearlings that include one of the the highest-priced trotting colts to ever sell, at $350,000. Passionate Glide herself, and two of her sisters, have also produced $100,000 yearlings, and the family is responsible for World Champion Muscle Mass and Hambletonian winner Muscle Massive. Passionate Glide's second dam? World Champion Keystone Profile, herself a record-setter in the sales ring at $425,000!