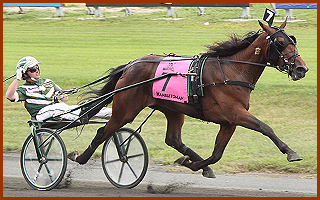 M, 2011 By Cantab Hall-Queen Of Grace, by Yankee Glide

Lifetime Pursuit became the fourth Brittany-bred filly to win the sport’s most prestigious event for distaff trotters, the Hambletonian Oaks. She, along with the other three—Passionate Glide, Lookout Victory and Marita’s Victory—would later be joined by 2018 winner, Manchego, to make it an incredible five Oaks winners in all for Brittany Farms.

Lifetime Pursuit’s victory in the 2014 edition of that classic race came in classic fashion, as she established a world record of 1:50.4 and defeated her highly regarded stablemate, Shake It Cerry.

She started her career winning five of her first six starts, with a second-place finish in that run coming in the $321,700 Merrie Annabelle Final. She ended her freshman season with more than $270,000 in earnings and a promise of bigger and better things to come.

As a 3-year-old she added almost $800,000 more to her account, thanks in part to her impressive score in the Hambletonian Oaks. She proved her versatility over all-sized tracks that season, as she established world records over mile and 5/8-mile tracks, and a national season’s record on a half, with those marks being taken winning the Oaks, Pennsylvania Sire Stakes, and Buckette.

Her first foal, a colt by Muscle Hill, sold for $215,000 from Brittany Farms' Lexington Selected yearling consignment. She is now part of the Hanover Shoe Farms broodmare band.